Stomach cancer and Oesophageal cancer are malignant tumours found in the tissues of the oesophagus or stomach.

The stomach stores food that has been swallowed and assists with the absorption of some vitamins and minerals. It also acts to pass the food and water into the rest of the digestive system, including the small and large bowel, where most of the processing of food takes place.

The different layers of tissue (known as the wall) in the oesophagus and stomach are:

In the stomach, acidic (gastric) juices are released from glands in the stomach mucosa. These juices break food down into a thick fluid, which then moves into the small bowel. When the broken-down food is in the small bowel, nutrients from the food are absorbed into the bloodstream. The waste matter moves into the large bowel (large intestine), where fluids are reabsorbed back into the body and the rest is passed out of the body as a bowel movement.

What is Oesophageal and Stomach Cancer?

Oesophageal and stomach cancers are malignant tumours found in the tissues of the oesophagus or stomach. Both cancers start in the mucosa. As they grow deeper into the oesophageal or stomach wall the risk that they might spread to other parts of the body increases.

Oesophageal cancer can occur in different types of cells that exist in the oesophagus. The main types of cancer are:

Adenocarcinoma – begins in the glandular tissue of the mucosa, which is found in the lower part of the oesophagus. If oesophageal cancer is not found and treated early, it can grow through the wall into nearby structures. Oesophageal cancers can also spread into the lymphatic system to nearby lymph nodes and through the bloodstream to other parts of the body, most commonly the liver. It can also invade the windpipe, lungs and the lining around the heart. 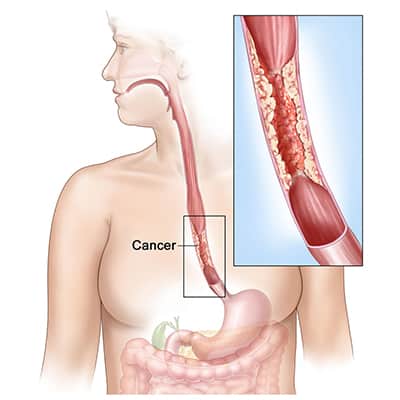 If gastric cancer is not found and treated early, it can grow through the stomach wall into nearby organs such as the pancreas and bowel. Stomach cancer can also spread into the lymphatic system to nearby lymph nodes or through the bloodstream to other parts of the body, such as the lungs. It may also spread to the lining of the abdominal cavity (peritoneum), which can cause swelling in the abdomen. 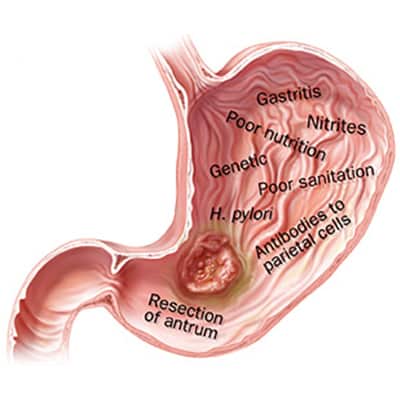 There are other less common types of cancer that can affect the oesophagus and stomach, including sarcomas, lymphomas, gastrointestinal stromal tumours (GIST), carcinoid tumours and small cell carcinomas. These types of cancer aren’t discussed here and treatment may differ. Call Cancer Council 13 11 20 for information about these rarer types of cancer, or speak to someone in your medical team.

What Are The Risk Factors?

People who have repeated episodes of reflux (heartburn) may be diagnosed with GORD. This is when stomach acid backs up into the oesophagus.

Over time, the walls of the oesophagus become damaged, causing inflammation or loss of tissue (oesophagitis).

In some people this may cause the cells lining the oesophagus to be replaced by a different type of cell. This is called Barrett’s oesophagus.

How Common Are These Cancers?

What Are The Symptoms Of Stomach And Oesophageal Cancers?

In their early stages, oesophageal and stomach cancers may not cause symptoms. These cancers are usually slow-growing and may grow for many years before any symptoms are noticed. This means that they are not usually diagnosed until the cancer is more advanced.

Symptoms of oesophageal and stomach cancers are listed in the box below. These symptoms are common to many other conditions and do not necessarily mean that you have cancer.

However, if you experience any of these symptoms and they are ongoing, make an appointment with your general practitioner (GP).

Gastric and Esophageal cancers are treated using a multimodality approach. Treatment is composed of a combination of Chemotherapy, Radiotherapy & Surgery.

Your Surgeon and Oncologist are the best people to determine the most suitable treatment for you. 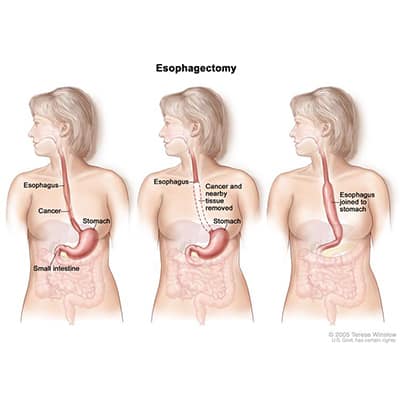 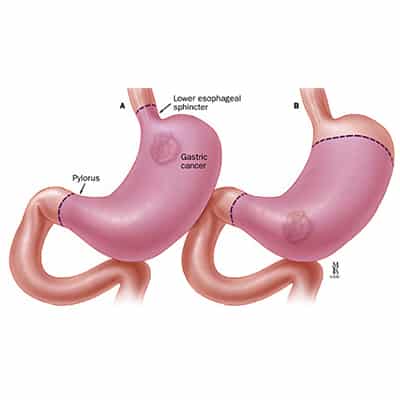